It has been great fun making the film Macbeth’s Disciple and bringing to life some of the off stage action alluded to in Shakespeare’s text. 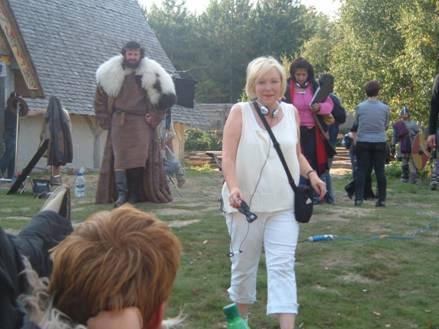 You never know when Macbeth is watching you! It was quite funny when Macbeth, played by Roger Barclay, was on set as both crew and other cast members said they felt as if they wanted to bow or curtsey to him. Roger had such presence in the role. That’s me in the cream gear going to talk to another cast member, Sam Wood-Dow who played Douglas.

I was very pleased to receive this comment from a cast member after the London screening.

Even though I have always been very aware of Shakespeare it’s so often been taught to me in the dullest, lifeless, un-flattering and boring way. I truly believe more films of Disciple’s nature should be made as they would have such a positive effect and would give Shakespeare back its value. One of the first things I did when the credits stopped rolling was turn… and say, ‘ Well? What happens next? I wanna see!”

Thanks Tom, it was good to hear this.

Please write to us and let us know if you feel the same as we would love to hear from you.